MY CRAZY MANSION IN THE GHETTO 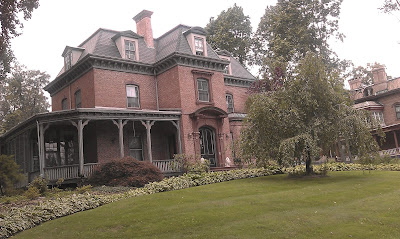 Over the next 12 months or so, a few things happened. Led by the decline in the housing market, the U.S. financial system and world economy teetered on the verge of collapse, with venerable firms like Bear Stearns and Lehman Brothers going out of existence. My father died. I bought a big old house at 297 Grand Street, Newburgh, NY.

Sometimes called The Fullerton Mansion, the building is over 7000 square feet, including a separate apartment on the third floor (probably carved out of attic space in the early 1900's). It sits on 1.3 acres, and has a circular driveway in front, which feeds into a longer driveway that runs the length of the property and through to the next street, which is Liberty Street. The carriage house/garage is of the same vintage as the house, and itself comprises over 3000 square feet, but is currently useable only for storage and dreaming of possibilities.

In 1868 Judge William Fullerton built the house as his second home. An Orange County native who became a successful New York City trial lawyer, Fullerton made his fortune and reputation in the service of the so-called "robber barons", whose incessant feuds over the ownership of railroads, manipulation of the still-evolving stock market and efforts to curry political favor required highly skilled and expensive legal specialists. Fullerton's methodical cross-examination technique was widely-admired and studied in 19th century law schools. In 1875, he achieved national and even international fame, heading the plaintiff's legal team in Tilton v. Beecher -- the adultery case against the Reverend Henry Ward Beecher (brother of Uncle Tom's Cabin author Harriet Beecher Stowe), a central event in the social history of the era.

Fullerton's later years were marred by charges of corruption, the failure of his law firm, and the untimely death of his son, a promising young composer. He retired to live in the Newburgh mansion until his death shortly after the turn of the century.

During much of the 20th century, the house was a funeral home, run by three generations of the Walsh family, members of which lived on the third floor and also built a smaller home, which was eventually sold off, on the Liberty Street end of the property. This afforded some continuity, and probably explains the survival of some of the wonderful original details. But there were also some use-driven modifications which have unfortunately obscured what was there before. The main hallway, for example, now has a tile floor that would not be out of place in an NYC subway station.

But there also some special features dating from the early twentieth century -- the huge cast iron stove in the kitchen (patent date of 1916); the circular shower which I am told was the first shower in Newburgh; and the bright, glass-enclosed "solarium", with its oak-beamed coffered ceiling.

There have been several owners since the 1970's. At one point it was broken into several apartments but some renovation and restoration has also taken place. The immediate owner had lived there for seventeen years and added a number of features that made the property more attractive for me as a purchaser -- an artificial slate roof on both buildings, a grand chandelier in the dining room, wonderful cherub light fixtures on the stairway to the second floor. But there remained much to do, and the house has experienced serious deterioration, exterior and interior.

It is an extraordinary place, with commensurately large challenges. I often say to people -- and I have no idea what they think when I say it -- that I don't really have the time, the money or the know how for this project, but I am doing it anyway.I had been looking for something much smaller, and often wonder if I have bitten off far more than I can chew. The book title "A Bridge Too Far" sometimes resounds in my head. But it has provided me with a host of learning experiences, various new friends, and -- I hope -- personal starting point for helping Newburgh become great again.